And Care for All: Parson Task Force Examines State’s Access to Affordable Heal 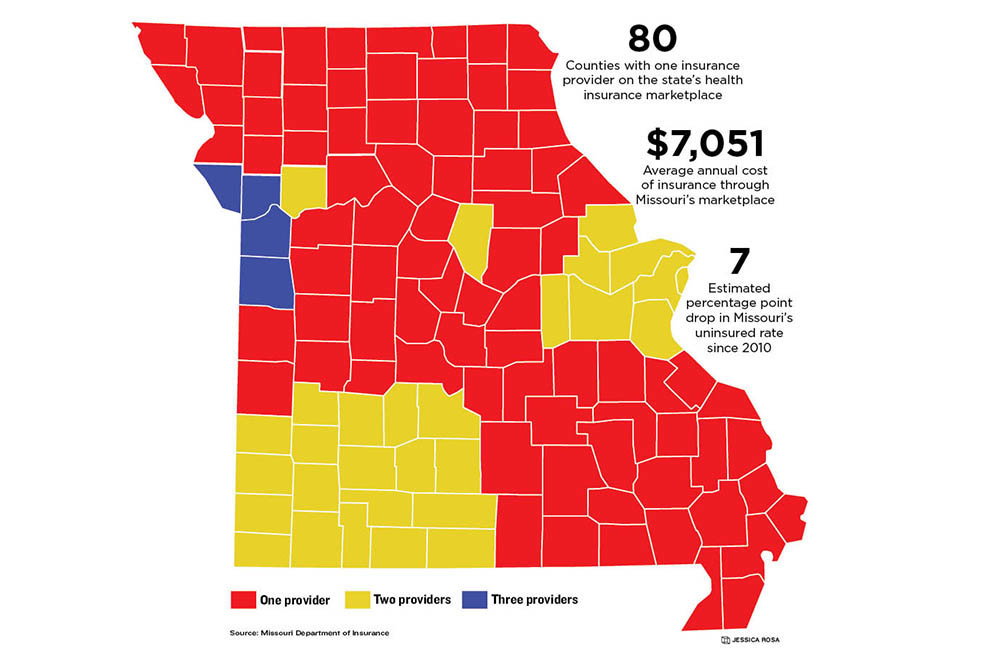 As Democratic presidential hopefuls debate the future of the country’s health insurance on the national stage this summer, Missouri’s leadership is working to provide more affordable options to its residents.

Some estimates show the percentage of uninsured Missourians has declined 7 percentage points since the passage of the Affordable Care Act in 2010, but the cost of coverage through the state’s health insurance marketplace has dramatically risen nearly 240% in the same span.

While the task force is still in the early stages, Lindley-Myers expects to cover ways to encourage more insurers to join the state’s marketplace and to provide coverage to more counties. This will likely be supported by an application under Section 1332 of the ACA for the state to waive specific provisions of the federal health care law, making the Missouri marketplace more attractive to providers.

“Missouri knows best when it comes to taking care of our citizens, not Washington, D.C.,” Parson said in his announcement of the task force. “Our health insurance market is not competitive, and there is no ‘one size fits all’ federal solution that addresses every issue of health care access and the rising cost of insurance premiums for Missourians.”

Currently, only four health insurance companies are on the state’s marketplace, with 80 Missouri counties having only one carrier offering plans in 2019, according to the latest Department of Insurance data.

“I want to make sure it’s a competitive environment,” Lindley-Myers said. “I can only encourage – and I have – insurers to come into our marketplace, but they have business reasons for not doing so. It’s always a balancing act between government, private entities and the people.”

The latest estimates from the Department of Insurance and the U.S. Census Bureau put Missouri’s uninsured rate between 8.4% and 10.9%, down from a recent peak of 15.3% in 2009, just before former President Barack Obama’s health care law was enacted.

But in 40 rural Missouri counties, uninsured rates remain above 14%, according to Census data, with the highest rate in northeast Scotland County, at 22.8% uninsured.

“As the state, we want to do all that we can to ensure people have choices,” Lindley-Myers said, stressing affordable options to fit their needs. “If they choose to not have any coverage at all, that is a choice that they make. I don’t want them to have to make that choice because there is no one.”

“There’s just no competition in the marketplace right now,” he said. “You have a lot of counties that have one choice, and one choice only; that eliminates competition, which eliminates price competition.”

In 2018, Congress voted to remove the penalty for individuals who do not have health insurance coverage, effectively nullifying the individual mandate. This change to the law now has state attorneys general and lawmakers calling the constitutionality of the ACA into question, and the decision currently is before the Fifth Circuit Court of Appeals.

Following that change from 2018 to 2019, enrollment in the state’s marketplace declined 9.4%, according to the Missouri Foundation for Health.

Lindley-Myers said it’s important for insurance companies to have a healthy mix of enrollees to stabilize costs.

“Insurers are generally trying to ensure they have healthy people as well as sick people,” she said. “You’re not going to be in business long if everybody in your coverage area is sick.”

Both Lindley-Myers and Merrigan cited multiple other factors causing the statewide increase in premiums, which average $7,051 for individuals accessing care through the state marketplace.

They pointed to rural community access, and Merrigan identified the poor health of the state’s residents as another contributing factor. Missouri recently ranked No. 38 on the United Health Foundation’s list of healthiest states.

“Rural America is under siege. … There’s a lot of closures of small rural places, which means access has become limited. People are putting off care, and when they access care, they are in a worse state than they would be,” he said. “Premiums are usually driven by utilization; utilization goes up because there is a sicker population.”

Parson’s new task force includes four Republican legislators, four insurance company officials and an insurance producer, as well as a representative for the state’s hospitals. Lindley-Myers said the task force members will create suggestions for the Section 1332 waiver application and discuss other options to provide more affordable health care coverage. The task force’s findings are due to Parson’s office by Jan. 31, 2020.

Cox HealthPlans President Matt Aug said the insurance provider covering 26 Missouri counties currently does not provide an option through the state’s health insurance marketplace. But the company is looking into changing that next year. They’ll make their final decision by the fall.

“We evaluate every year participation in the marketplace,” he said. “Currently, we have filed the necessary information to participate in the marketplace in 2020. The continual changes on the regulatory environment always give us a sense to pause and evaluate.”

Because the marketplace requires insurers to price their plans for an entire calendar year several months in advance, Aug said, “It’s hard to evaluate sometimes the overall risk.”

Giving his support of Parson’s task force, Aug said he’d be willing to join to represent the state’s only provider-owned insurer.

“It is a very complicated issue. When you get the proper stakeholders in the room, that makes sense and I appreciate him getting this group together,” he said. “The No. 1 issue is how do we help innovate and transform health insurance on the individual market.”

Although it’s not been outlined as part of the task force’s review, Merrigan, who previously served two decades as Mercy’s general counsel, cited the expansion of Medicare as one solution to drive down insurance premium costs.

Lindley-Myers said she wants to examine everything “to see whether or not the current system is working.” She said the task force will look into alternative forms of insurance already available in Missouri, such as short-term health policies.

“We care about all Missourians getting the best possible coverage that they can from the system,” she said.